(U.S. Concrete)  CNBC's Jim Cramer hosted our CEO, Bill Sandbrook, on his hit show Mad Money. The two discussed the prospect of U.S. Concrete stock (USCR) and why it should be a high-potential buy through the course of the next several years.

One of the many reasons the stock appears like a good investment, according to Cramer and Sandbrook, is the amount of growth in the urban areas where the company does business. U.S. Concrete is, for instance, the primary concrete supplier for the new World Trade Center and is one of Northern California's primary suppliers as shown by the San Fransico 49ers new stadium project. The crown jewel for U.S. Concrete, however, is its presence in North Texas, which takes the largest percentage of business. Dallas has hardly been hit by the significant slump of the oil and gas industry and is one of the fastest-growing metropolitan areas in the country.

Later in the interview, Cramer asks for a prediction of the effect of a Trump presidency. Sandbrook believes the renewed investment in national infrastructure could lead to some high-yield projects over the next 3-4 years. The talk of a $1 trillion infrastructure spending plan has certainly raised eyebrows and has raised them enough for U.S. Concrete to reevaluate their strategy for the potential influx of new projects. That said, U.S. Concrete's strength will still reside in its work in high-growth urban areas with a high barrier-of-entry.

You can view the rest of the video here: http://www.cnbc.com/2016/12/14/trump-just-boosted-up-to-6-years-of-economic-opportunity-us-concrete-ceo-says.html 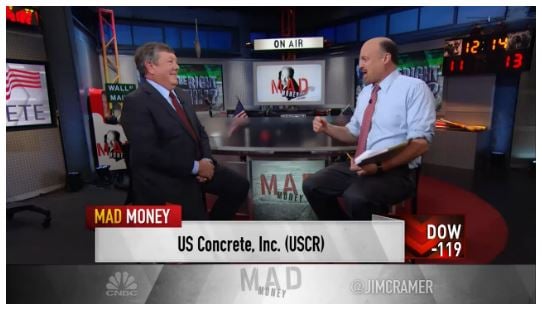